Sweet Sorrow is about life itself! The life in which we find things important, miss things, admire and appreciate things……. Sweet Sorrow catches the transiency of our life in one term. You often start missing something when you have lost it. You only realize what is important in life when you’re about to lose it. Snow is such an example of fleetingness. There’s so much going on in this world that it is about to become a rare substance. Snowmen are symbols for a creativity that, in the near future, might only be remembered in stories. Sweet Sorrow is about things that we must use sparingly because the availability of it is not a matter of course! Sweet Sorrow is inspired by the words of Shakespeare in Romeo and Juliet……. “Parting is such sweet sorrow”…! Maria den Oudsten is creator and initiator of the Sweet Sorrow ideas, a worldview in which the transiency of the world is addressed. In the Sweet Sorrow book the words and insights of Shakespeare are combined with paintings and ideas. In 2002 Maria den Oudsten organized, as chair of the rotary Club in Winnipeg, Canada, a competition to build 10,000 snow men. She persuaded entrepreneurs in town, using her well known charme and determination, to build nice snowmen in front of their shops and companies. She called this idea ‘Snowmancity’. The result was phenomenal! Hundreds of snowmen, larger than life, ornamented the town and inspired families and children. The purpose of this ‘Crazy Idea’ was to be proud instead of complaining about snow, a commodity that is slowly disappearing and becomes rare. The snowman with his accordion won the competition, became immortal in paintings and inspired the logo of Sweet Sorrow. The snow man with accordion inspired paintings and the Sweet Sorrow logo. An image that remains, even after all the snow has melted. An emotional icon representing music and nostalgia.

Snow forms the basis of an entire series of paintings that approach the theme Sweet Sorrow from two sides. On one side there are the romantic paintings by Steve R. Mitts with great attention for details. They show a deep nostalgia to whats past, to an innocent world but also the hard battle to survive in Shakespeare’s time. On the other side there is the love for the Canadian landscape in Brittani Faulkes’ paintings. She tells the big story of beauty and loneliness of the untouched nature in warm colors with just an edge of snow. She paints the larger picture but at closer look the gradient details are very precise. All in all it’s a large visual contrast in techniques. Which painter do you prefer: Steve’s details or the larger picture by Brittani? Take a closer look, play with the images and let them inspire you.

The Canadian snow landscape has always been an source of inspiration for Sweet Sorrow. It all started with a 10,000 snow men contest in 2002 in Winnipeg, in the heart of Canada. Companies build larger than life snowmen which inspired kids and schools to build the best an most beautiful snowman.
Painter Brittani Faulkes creates a spiritual Canadian landscap, using patches of color and gradient techniques, in which the main line of endless nature and winter’s influence come together in a multi dimensional image of Snowmanland.

The next step to take for Sweet Sorrow is to convert the texts that make you think into melodies that have been in our heads for centuries. Music is a learning tool in itself. In 2016 this part of awakening comes to life in the Sweet Sorrow Award. This page is intended to soak up inspiration for Sweet Sorrow, the same inspiration that made Maria den Oudsten further explore the messages hidden behind Sweet Sorrow. Look at the paintings, read Shakespeare’s proverbs, the song texts and the music sheets and use all of this to join the Sweet Sorrow contest and win € 2500,-! Register for the contest on this page >>>>

A Canadian vocalist already sang a few songs. These are displayed below, with accompanying music sheets and songtexts. It will give you an idea of the styl ewe are looking for.

Text : "North of the North Horizon / A puddle was his fate"
Download music and song texts by clicking the music sheet icon below 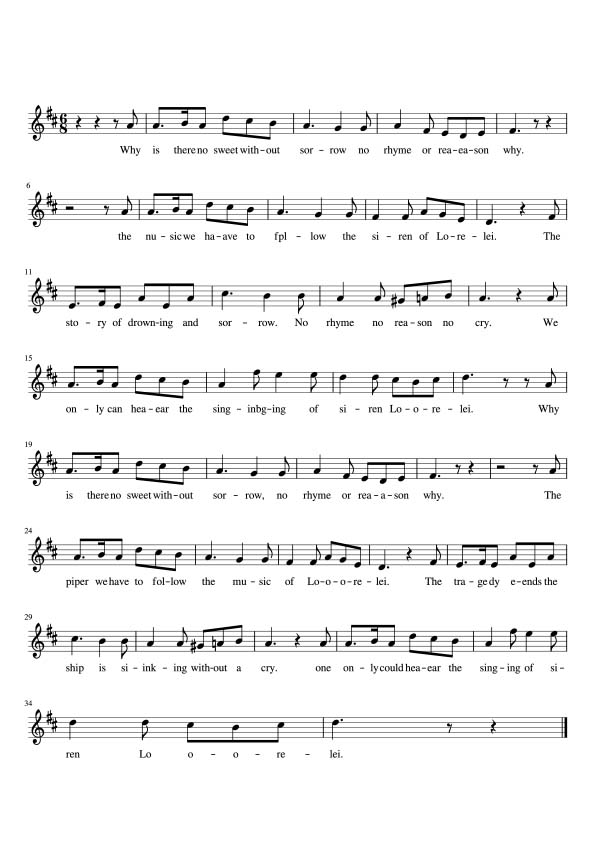 Melody: Why is there?

Text: "Why is there no sweet without sorrow"
Download music and song texts by clicking the music sheet icon below

Hannah will NOT compete in the Sweet Sorrow Award!